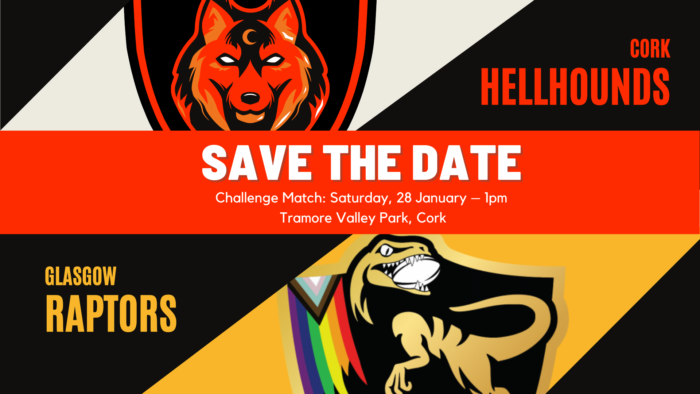 The Cork Hellhounds were founded in 2020 as an inclusive rugby club, with the support of both the Gay Project (Cork’s community centre for gay, bi, and queer men) and Munster Rugby. They have since become a core part of Cork’s LGBT community, becoming affiliated by the IRFU and International Gay Rugby, and hosting tag rugby tournaments as part of the Cork Pride festival.

In preparation to take part in the IGR Union Cup tournament in Birmingham in April, the Hellhounds have invited the Glasgow Raptors to Cork to play in Tramore Valley Park. Kick-off is at 1pm, and all are welcome to support.

“We’re excited to see the Glasgow Raptors come to Cork for our first official fixture of the new year”, said Scott De Buitléir, Vice-President and Communications Officer for Cork Hellhounds RFC. “Last year, we travelled to Belfast to play against another IGR team, the Belfast Azlans, where we gained a hard-fought win at the University of Ulster. As we prepare for the Union Cup, we’ll be testing our skills on the pitch with the Raptors.”

The Hellhounds are also running a free “Intro to Rugby” training series for beginners at their training grounds on the Ringmahon Road every Sunday until the end of February. Registration is free and all are welcome, including those from the LGBT community and their allies.

Notes to the Editor: